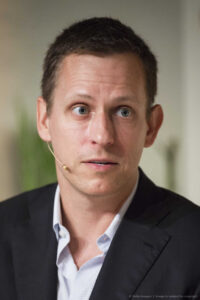 In March 2016, I was surprised and honored to be invited by Peter Thiel to speak to his staff over lunch. He sent plane tickets for me to fly to San Francisco and I visited his office in the Silicone Valley.

Peter Thiel is an extraordinary young man. He is a German-American billionaire entrepreneur and venture capitalist. A co-founder of PayPal, Palantir Technologies, Founders Fund, he was the first investor in Facebook. He was ranked No. 4 on the Forbes Midas List of 2014, with a net worth of $2.2 billion, and No. 391 on the Forbes 400 in 2020, with a net worth of $2.1 billion.

His support of young people with brilliant minds is both impressive and legendary.