BEING PART OF A SACRED RITUAL 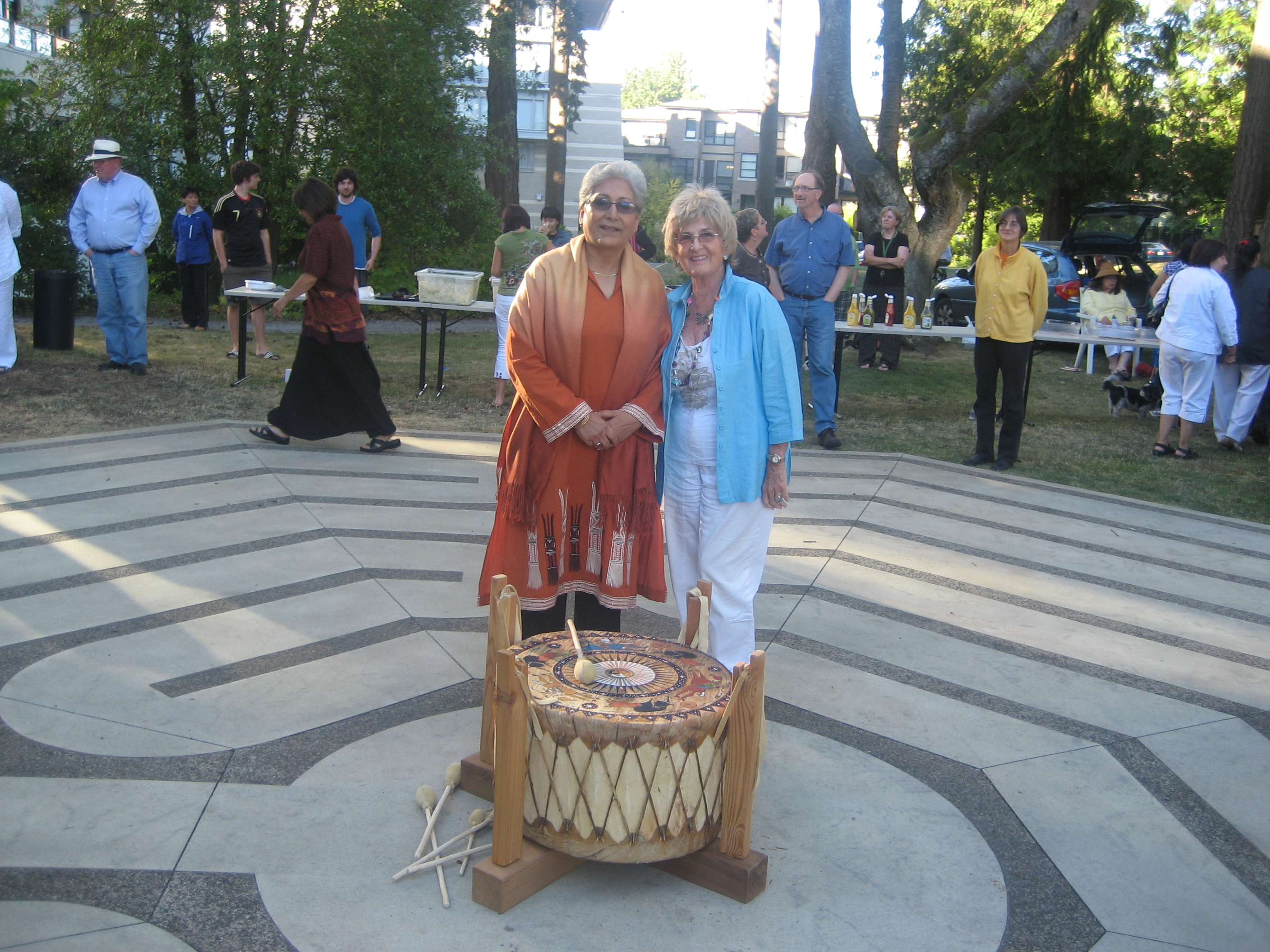 At Iona Pacific tonight I attended a celebration of 25 years of the VST Native Ministries Program. This is celebrated with a salmon BBQ and gospel jamboree. Elders and children from various indigenous groups who have been staying here to learn and teach were invited along with visiting faculty. Outside under a white tent on a beautiful crisp evening we sat around the labyrinth in the middle of which stood a lone large drum. The Rev. Dr. Martin Brokenleg who is from the Lakota clan and is a warrior, healer, educator and Vice President and Co-Founder of Reclaiming Youth International and Director of the VST Native Ministries Program welcomed us. The amazing and unique quality of this event was the stress on culture, an expression of thanks for each part of the evening and the stories of their traditions.

We were told the story of the drum. In the Lakota tradition Dr. Martin told us there is no concept of time – only rhythm – everything has a rhythm. So drumming is a very important component of the culture. This drum was dedicated to his brother and named Oyataywanjiho – one people. We heard the story that many years ago the Sioux and Lakota were enemies and fought constantly until there was a need for peace and a way to find alliance. One native elder saw a vision in which he was asked to undertake an 8-day fast. He took some young warriors with him on a fast and while he was fasting he saw a vision of a woman who said he needs to fashion a drum upon exact specifications. The two young warriors helped make that drum and this drum signified a gift from the spirit world but a sacrifice had to be made in return (for everything they are given, they must give back in return something)  so the two young men passed on to the spirit world once they completed the drum. The Sioux, Cree and Soto clans got together to give the drum a voice and made peace together by each holding one end of the drum with one hand while drumming with the other. It is said that the sound of the drum moves the spirit to peace and they made peace.

As we participated in sacred native ceremonies, the drum was central to all the rituals. Even a small tradition like making offerings was done to a drum beat and those who donated danced to the beat of the drum. Later I was given one of the greatest honours and respect in the community by being invited to count the offerings.

Young kids from the various clans came with their mothers and most often, grandmothers so arrangements were made for them to be there so the grandmothers could learn along with the kids. Everyone was given a gift and everyone joined in the circle of life. When they sang native songs, they said these were not for them – they were to give away. And they truly gave away to us their spirit of oneness with nature and of their closeness to the creator through their reverence for creation.

It is an experience I will always cherish and I am blessed and grateful that I could be here to participate in such a profound ceremony.