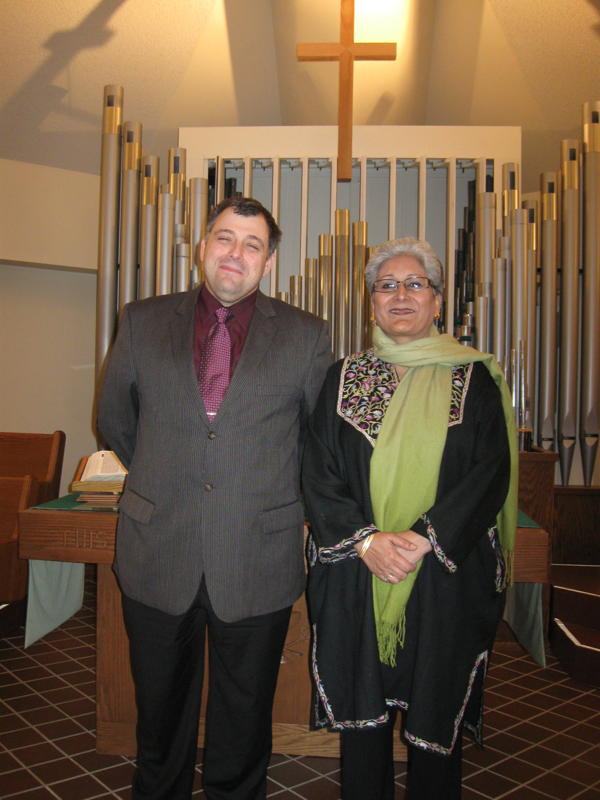 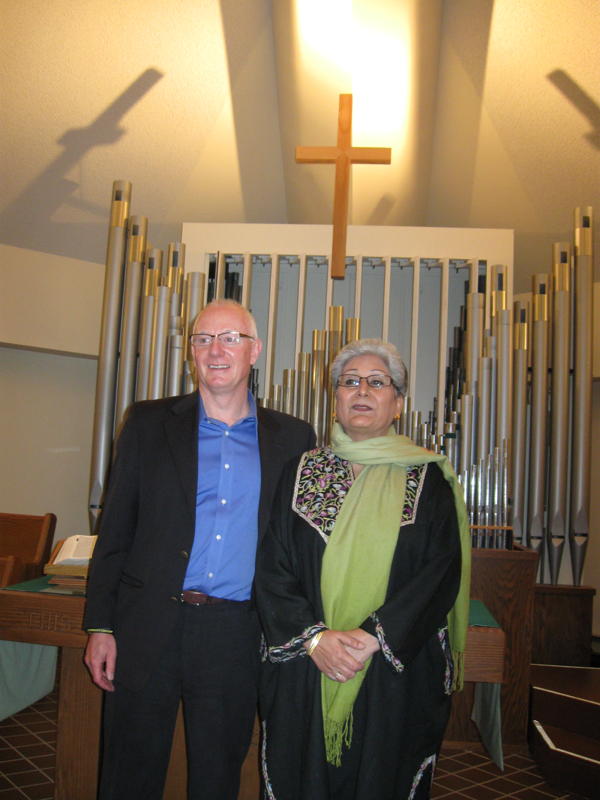 Raheel first met with the youth of KUC and Glen Cairn United Church. They asked her many provocative and thoughtful questions, showing an awareness of the Muslim faith and an interest in exploring current concerns. She described the five pillars of the Muslim faith: declaration of the faith (‘there is no god but Allah and Muhammad is His messenger’); prayer and conversation with God five times each day; charity to others; fasting (spiritual cleansing) during the month of Ramadan; a pilgrimage to Mecca (if possible). Raheel then invited them and the adults of the two congregations to join in her evening prayers.

The November 6th session was open to the public, with over 100 people in attendance to hear Raheel address the topic, “Muslims and Christians: We Have Much to Share”. During her initial presentation, Raheel explored some of the difficulties experienced by people from many countries who immigrate to secular, multicultural Canada, where religious freedom is respected – ‘to you, your faith; to me, my faith’ – and where diversity is celebrated.

Raheel pointed out that there are Muslims in Canada from almost 60 countries of the world, the majority of whom are law-abiding citizens, devote Muslims, but that their religion has been ‘hi-jacked’. Many of the ideas that extremists quote as religious law are, in fact, not part of the Muslim faith. The Qur’an speaks of war in terms of self-defence, and stipulates the protection of non-combatants, women, children and the environment. Suicide bombing is clearly identified as a major sin and is not justifiable under any circumstances. Raheel explained the concept of Jihad as a personal, spiritual struggle, and condemned the acceptance and marketing of “armed jihad” today. The Qur’an teaches that Muslims, Jews and Christians have a common ancestor in Abraham; that we are all ‘people of the book’, with much more in common that which might divide us.

Raheel then asked for questions, saying that any question could be asked and that all questions would be answered. Muhammad’s original message to the tribal societies living in Arabia was from one God, urging peace and cooperation among the tribes, and equality and respect among men and women. Men, as well as women, should dress modestly in accord with local custom and personal preference. An imam is chosen by a community and should be well informed religiously and culturally. Mosque and family are very important to Muslims.

Raheel stressed that change and healing must come from within. Fundamentalism is a reality in Christianity as well as in Islam; moderates must claim their faith, and condemn their own radicals. Christian and Muslim messages are much the same – we are to love God and serve others.

Kanata United plans to hold future public educational events aimed at exploring the diverse faiths around us, believing that by learning from others, we can learn more about ourselves.