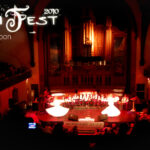 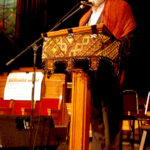 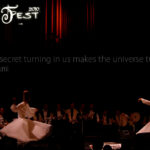 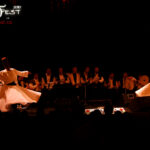 RUMIFEST  ROCKED –  an overview of a unique event in Toronto, Canada

All this singing – just one song. Rumi

Toronto – On Saturday October 23, 2010 the first Rumi Fest organized by Nomans Land Promotions took place at the Trinity-St. Paul Center in the heart of Toronto. As a start the venue spoke to the spirituality of Rumi because it’s a heritage building called a Centre for Faith, Justice and the Arts. More than 750 eager Rumi fans and some just plain curious, from across North America came to this historical Church to experience Rumi. From the word go, it was a heartfelt Rumi experience. Guests were welcomed with pieces of Turkish delights, plaques of Sufi poetry, Rumi-inspired art exhibits by The Open Easel, Books and CD’s on Sufism displayed by The Canadian Sufi Cultural Center, and strains of soulful Sufi music.

The main attraction of this event was Dr. Coleman Barks who flew in from Athens, Georgia. Dr. Barks has the distinct credit of introducing Mevlana Jelaluddin Rumi, the 13th Century Saint, teacher, mystic and poet to North American audiences. He has translated 15 books of Rumi and has dedicated the past two years for his magnum opus – The Big Red Book – a translation of Rumi’s Mathnavi which was available for sale and signing. Dr. Barks has been reciting Rumi for over twenty years but his deeply resonant voice only improves with time. For those who heard him then and now, it’s clear that he has aged to perfection and evolved into a Sufi. Dr. Barks’ lifework express ecstasy with an openness, whimsy, and practicality that make the everyday resonate with the sacred; that make the everyday holy. The audience couldn’t get enough of him. Against a classical background of pipes, organs and stained glass windows, Dr. Barks told stories, read poetry, chanted, laughed and recited. He was accompanied on the Cello by Anne Bourne who is a talent unto herself. Without much rehearsal, the two of them connected as though they were soul mates. Ms. Bourne would pick up where he left off and vice versa until her lilting voice, and the deep bass voice of Dr. Barks soared to the highest rafters of this stunning church sanctuary creating an ambiance that was breathtaking.

There were other artists who also added to this spiritual event bringing the best of their talent and spirit. Garo Altinian presented Rumi through Turkish and English songs, accompanied by profound poetry. He was accompanied by Agah Ecevit on the ney;  Fatih Tandogan on the Bander (frame drum); Amir Amiri on the Santur, Rafi Karsli on frame drum and Leslie Gabriel Mezei reciting vocals.

Following this the audience was mesmerized and regaled with an extraordinary rendition of Rumi by Irshad Khan, who is one of the best musicians of today. He has been called the Mozart of India, and his contribution to this event was to sing Rumi in English on Sitar accompanied on Duff (frame drum) – a first. Irshad Khan got a standing ovation and the audience didn’t want him to leave. But there was more.

The Jerrahi Sufi Order of Canada were the grand finale of this amazing night. They took the stage with their musical instruments ranging from Ney to bander, santur, cello, violin and vocals, they performed zikr to the most uplifting and spiritual musical accompaniment while their Shaikh Tevfik Adoner chanted verses and poetry. Two of their sema-zens had driven in from USA and they whirled for almost one hour. The audience was mesmerized and one person was heard to say that there had to be some higher presence for them to be able to whirl the way they did. The Jerrahi Sufis got a standing ovation for more than 5 minutes as the program ended on a high note through eloquent closing remarks presented by Dr. Fuad Sahin who is recipient of the Order of Ontario and an age-old practitioner of the spiritual path of Islam.

Rumifest was the brainchild of Noman Siddiqui, a young composer and mystic at heart whose ambition is to inspire the mind and soul through music and to promote soulful music & arts events as a force for unity and global peace. He succeeded in doing this and more, as the largely non-Muslim audience commented on experiencing the spiritual message of Islam and seeing the “other” face of this faith, as they have never had an opportunity to do so.

One of the attendees has this to say: I’ve returned home from Rumifest spiritually ecstatic from the uplifting experience! At one point in the final act, I even picked up the nerve to ask my neighbors if we could hold hands; a tribute to the sense of union to which Sufism aspires.”